In the midst of growing global vulnerabilities, India shines as the fastest growing major economy with robust GDP that is expected to continue in 2019. The positive outlook is buttressed by strong drivers emanating from services sector, infrastructure structure including construction equipment and better demand conditions arising out of election spending. 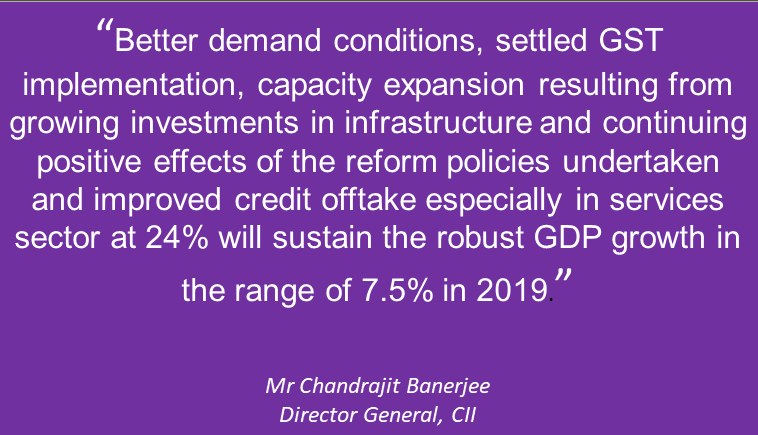 CII observed that despite the year 2018 being one filled with external vulnerabilities arising out of rising oil prices, trade wars between major global trading partners and US monetary tightening, Indian economy outshined as the world’s fastest growing major economy in 2018.

CII has identified seven key drivers for growth that need to be fostered and has suggested policy actions for robust GDP growth to continue in 2019.

One, the GST Council, in its 31 meetings in 2018, has addressed numerous issues related to rate structure and procedural matters. CII had suggested lowering the number of tax slabs to three –  a standard rate, a higher rate for demerit goods and a lower rate for some mass consumption items. CII also hopes that the Council will also consider extending GST to excluded sectors such as fuels, real estate, electricity and alcohol.

Two, the Insolvency and Bankruptcy Code completed two years and is helping address the issue of non-performing assets. While the process of resolution has taken shape, CII feels that Government should consider setting up additional benches of the National Company Law Tribunal to spread geographically to strengthen the judicial infrastructure for easier and faster exit of distressed businesses.

Three, On Ease of Doing Business, CII feels that the Government would certainly continue to place high priority on simplifying business procedures in 2019, especially in terms of working with states for grassroots improvements. CII looks forward to digitization of land records, online single window systems in states, and enforcing contracts for even more improvements in ease of doing business.

Four, Measures to unlock agricultural markets has been well undertaken to encourage private sector participation in agriculture. Going forward, CII suggests that it is important to persuade states to implement the Agriculture  Produce and Livestock Marketing Model Act, which has been implemented in just 4 states, to strengthen Agriculture produce marketing. Further, CII also looks forward to implementation of e-NAM mandis to be prioritised based on proximity to production clusters with well-equipped assaying labs and packaging and logistics facilities/services linked with e-NAM to promote inter-state trade and improve E-NAM handling share from the current 4.5%.

Five, over the immediate term, credit availability has been a challenge, particularly for the micro, small and medium enterprises. Credit flow to industry grew by only 2.3% in H1 of the current financial year. CII submits that the RBI should introduce measures such as revisiting lending restrictions of PCA banks, opening of a limited Special Liquidity Window to meet emergencies of Financial Institutions including Mutual Funds besides others to improve liquidity in the system. In this context, CII has welcomed the RBI’s recent announcement of banks lending to NBFCs for easing liquidity situation in the stressed NBFC sector.

Six, while oil prices are trending down at the end of 2018, its rise during the year by about 10% was a concern. CII opined that India would need to continue to guard against the risks of higher oil prices by increasing domestic production of Oil, providing a special window for Oil Marketing companies to procure oil and stepping up diplomacy with USA to continue to secure purchase from Iran. This would also help in effective exchange rate management.

Seven, while the fiscal deficit target of 3.3% is expected to be fulfilled, CII advocates that the Government should keep continuing its strong program of infrastructure development, including roads and highways, airports, waterways, and ports. This would provide the necessary growth impetus for downstream industry sectors as well as generate employment opportunities.