In a rapidly transforming global economic environment, the role of the tax structure of economies has gained heightened relevance. Across the world, from advanced economies to emerging ones, tax rates for companies are being slashed to enable sharper competitive advantage. India has also taken note of these developments. 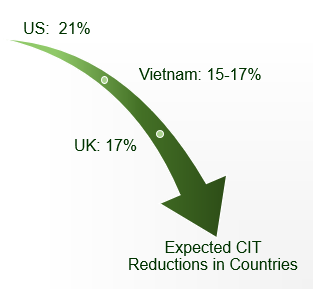 The US has dramatically reduced tax rates across the board and promised to greatly simplify tax laws. Apart from the new low corporate income tax (CIT) rate of 21%, it also repealed the corporate alternative minimum tax, and provided for an indefinite carry-forward of losses. In an effort to make Vietnam more regionally competitive, the country plans to cut CIT rates from 20-22% to 15-17%. UK has strategized to lower the rate from 19% to 17% in 2020. Argentina, France, Sweden, and Belgium are in the process of reducing their corporate tax rates based on plans that have already been adopted.

According to a recent OECD report, the average corporate income tax rate across the group has dropped from 32.5% in 2000 to 23.9% in 2018. The report highlights that among the countries that introduced significant corporate tax reforms were a number with high corporate tax rates, where tax reform was long overdue.

In India, CIT had remained largely unchanged for years and the effort has been to streamline, simplify and digitize processes. As per Budget 2014-15, CIT was to be reduced to 25% for all companies in a phased manner over four years. Delivering on this, present CIT was slashed for companies up to Rs 250 crore turnover to 25%, while larger companies are liable for a rate of 30% plus surcharge and cess. Companies which deliver less than this rate on book profits are subject to 18.5% of minimum alternate tax (MAT) and also pay 20.56% as dividend distribution tax (DDT). Corporate tax collections have gone up from Rs 2.44 lakh crores in 2009-10 to Rs 5.64 crores in 2017-18.

In the past decade, the Indian government has made several attempts to simplify and rationalize direct tax laws. A committee was appointed under the chairmanship of Justice R.V. Easwar in 2015 and submitted its first interim report on income tax simplification in January 2016. A number of recommendations of the Committee were accepted with amendments in the Income Tax Act. In November 2017, a task force was constituted for drafting new direct tax legislation, taking into account international best practices and India’s economic needs.

In the context of declining trend in CIT across key economies, CII has been advocating that the corporate tax rate should be brought down to 18% for all companies. This should be done in a situation where all cesses and surcharges as well as most incentives and exemptions are eliminated.

This would generate higher surpluses in the hands of companies and boost investment, employment and growth. A more competitive industry sector will also be favorably positioned to address export markets, while overseas investors would be attracted to a low-tax rate environment.

The high rate of MAT dilutes the tax incentives available under the Income Tax Act and adversely impacts cash flow. We have suggested that the MAT be abolished or, alternatively, the rate be brought down to 10%. Similarly, DDT levy leads to double taxation and should be done away with. Alternatively, a basic exemption limit of, say, 10% of profits or capital should be provided where the company distributing dividend up to 10% is not made liable under DDT.

An important element of the new direct tax legislation would be administrative simplification. E-assessment has been somewhat slow to take off, partly because of some legal infirmities and partly because the income tax department’s IT infrastructure is still being laid out.  Industry members must consider availing of this e-assessment facility as it would reduce litigation on the validity of the proceedings and technicalities regarding the recording of the reasons and the necessary approvals. It would also ensure transparency and minimal interaction between the government and assessees. Large tax cases should be handled electronically with initial glitches being resolved by the income tax department and taxpayers together.

The Easwar committee draft tax code was finalized after discussion with various industry associations and other stakeholder groups. Stakeholders should carefully go through the suggestions and take a holistic view, considering the long term impact of the provisions.

The way towards net-zero emissions