The Multinational Corporations (MNCs) in India have the potential to bring dynamism to our development journey, compliment the efforts of local companies and thereby take the country to the high echelons of growth with inclusion. With numerous positive attributes, such as a vast pool of resources, knowledge of multiple markets around the world and a proven track record in global business operations, MNCs can play a pivotal role to script the India growth story. Besides, their expertise in terms of cutting-edge technology, management and skills are crucial to enhance the global competitiveness of local firms. The MNCs are leveraging these attributes to accelerate India’s pursuit to emerge as a vanguard of global manufacturing, technology and innovation. As India strives to emerge as a US$10 trillion economy in near future, the role of multinational companies in realising this vision, would become even more important.

Recognizing the growing contribution of MNCs in India’s development pathway, the Government has taken firm steps to provide a conducive business environment for multinationals. 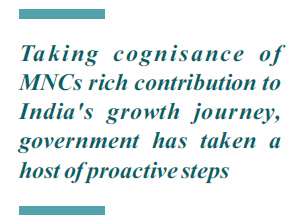 To begin with, it has liberalised FDI norms in a host of sectors. FDI in most sectors is now under the automatic route, except for a small negative list, making India one of the most open large economies in the world. Similarly, the government has taken proactive steps to improve the ease of doing business. The procedures for starting, operating and closing of business have been simplified. The focus is on single window clearance, which together with digitization would reduce the time and cost of business. Our ranking in the Ease of Doing Business Report of the World Bank has taken a quantum leap to 77 from 142 in 2015. Further, structural reforms in taxation, investment infrastructure, logistics among others are well appreciated by MNCs.

The country’s attractiveness as a global investment destination, and as a place where global companies can do business has significantly improved. The MNCs have responded positively to the reforms pace and as a result there has been a tremendous rise in foreign direct investment (FDI) in the country.

Multinational companies like Alstom, Boeing, Xiaomi, etc are setting up manufacturing plants in India in partnership with local players. Local manufacturing gives MNCs the advantage of saving on import duty and logistics costs, reducing lead time for deliveries to the customer and manufacturing products that are tailored to Indian operating conditions. Similarly, Vodafone, Walmart, Hewlett Packard etc are among the leading services sector MNCs. MNCs operate in all the major sectors including defence, automobiles, civil aviation, retail, information technology, telecom, R&D and business centres, among others and are expanding their footprint in India. Today, the Indian market has become a priority for MNCs looking to get a bigger share of the global market.

Consequently, large number of MNCs have taken their business to the next level, positioning India both as a business hub serving global clients and as a base for exports. This is happening especially in companies manufacturing automobile or consumer durables. Hyundai Motor Co., for example, is now India’s second largest car maker and looks at India as an export hub for other emerging markets.

No doubt, the government has undertaken a host of reforms to improve the investment climate in the country to make India an attractive business destination.

Nevertheless, while these measures have started yielding results at the ground level, they still face several regulatory bottlenecks, which adversely affect their operational efficiency and competitiveness in the country. While some of the impediments impact both domestic industry and MNCs, others are exclusive to MNCs which need to be addressed to create a level playing field. Let us first articulate issues which impact industry-both domestic and foreign operating in the country.

Both MNCs and the domestic sector are limited by poor infrastructure particularly with regard to ports, roads and rail which raises the cost of business. Improvement of rail and road connectivity with major industrial clusters would go a long way to rejuvenate industry-both domestic and foreign- and help to carve a niche in the global marketplace. Besides, consistent power supply at reasonable cost and digital integration of infrastructure is a basic need to drive efficiencies and sustained output.

Similarly, continuing reforms in the ease of doing business, revamping of land and labour laws, a stable tax policy, addressing glitches in GST among others would also contribute significantly to productivity within industry and help achieve global competitiveness.

Apart from the above issues, there are areas which exclusively impact the MNC businesses in India. For one, today corporate tax paid by foreign companies stands at around 40 per cent (excluding the cess and surcharges), whereas, for the domestic companies, having turnover up to 250 crores, the tax rate is 25 per cent and 30 per cent otherwise. The corporate tax rate for MNCs needs to be reduced and brought at par with domestic companies to provide a level playing field between the two segments.

Third, regulations on transfer pricing (TP) is creating concern among MNCs. The Central Board of Direct Taxes (CBDT) has made it mandatory for multinational companies to provide details about their global operations in India.

This may be confidential. It is recommended that the government should reconsider its requirement of maintaining the master file. Various amendments, including the format of master file, maintaining the confidentiality of the data, among others, should be simplified. Detailed guidelines in line with the OECD BEPS Action Plans 8-10, where India has also provided its consensus, may be introduced in the Indian TP regulations.

Further, clear guidance or safe harbour should be provided, by way of an updated circular, for R&D centres specifying a uniform transfer pricing methodology. Bilateral Advance Pricing Agreements (APAs) and pending appeals must be finalized on priority for disputes involving such centres.

Fourth, the recent Securities and Exchange Board of India (SEBI) regulation has proposed a reduction in the royalty payment to 2 per cent for listed companies, a move that MNCs maintain is adversely affecting sentiments ofIndian subsidiaries to list in the country’s stock exchanges as the order has created a distinction between listed and unlisted companies.There is need to reassess this order as the distinction created between listed and unlisted companies can discourage participation from foreign companies in the country, thereby adversely affecting transfer of advanced technology and R&D in India by the foreign companies.

Fifth, the sourcing norms under FDI policy for single brand retail, especially operating in the cutting- edge technology space may be reviewed.

No doubt, the 30 per cent local sourcing norms has been relaxed and is now applicable for global operations of MNCs for the first 5 years. However, much more needs to be done. There should be an increase in time lines for local sourcing to beyond five years. Also, further liberalisation of FDI norms in retail will significantly boost FDI inflows. This will also give a big push to exports from India while supporting ‘Make in India’ initiative of the government.

Sixth, there is need to create world class testing infrastructure and standards across the country aligned with global best practices to ensure quality product. There is no doubt that the country is working to evolve further into a global business hub. This provides significant scope for MNCs to leverage this opportunity to play an even greater role in the country. However, MNCs will need to invest ahead of the curve and be committed to this opportunity. This is clearly an imperative and no longer an option.

Note: Views are personal and do not necessarily represent views of CII

Global and Indian Economic Prospects for 2021