The financial sector today represents the very foundation of an economy and its smooth functioning is crucial to enabling industry to achieve its full potential. Recent developments such as exchange rate fluctuations, rising non-performing assets (NPAs), and upcoming loan repayments have eroded the liquidity balance in the Indian financial markets. For industry, strains in liquidity result in non-availability of credit and higher interest costs, curbing investments at a time when demand is set to pick up in the economy.

An asset-liability mismatch due to short-term funds being used for long-term lending defines the situation for non-banking financial companies (NBFCs) and housing finance companies, which have emerged as increasingly important players in the financial system. Over the last few years, bank loans to NBFCs went up by over 40%, as compared to bank loans to industry at less than 3%. Similarly, funds going to the real estate sector from sources other than banks have seen a whopping 45% compound annual growth rate over the last few years. 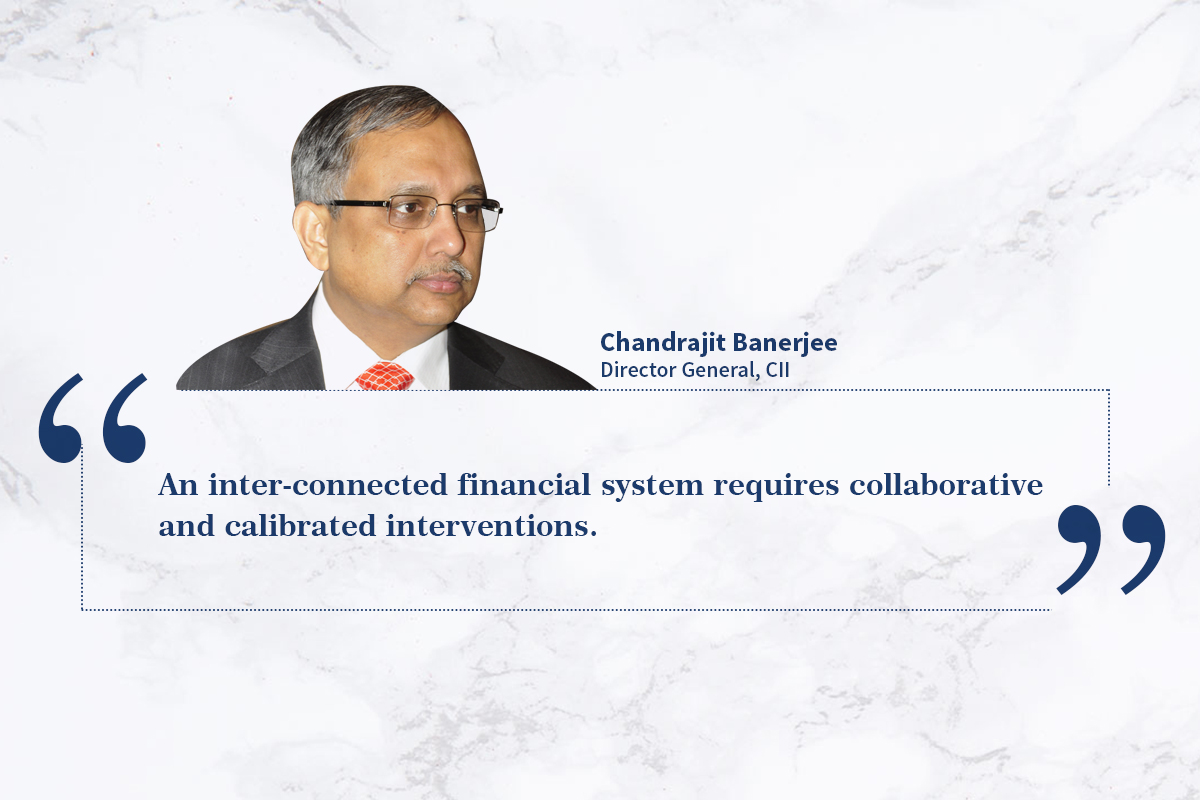 The liquidity prevailing in the economy as a result of various developments has turned tighter. From  a situation of plenty, today a liquidity deficit of over 1.4 trillion is impacting credit availability. While mutual funds are facing outflows, NBFCs are troubled by lack of funds. With $39 billion in debt coming up for repayment shortly, roll-over of debt may emerge as a serious issue. Already, the rates for short-tenure commercial papers have risen, and non-banking companies are resorting to other finance sources such as external commercial borrowings.

Within this scenario, it is important for the Reserve Bank of India (RBI) to reassure investors and depositors that the liquidity taps will remain open. This will ensure stability and predictability of the financial system so that normal business activities are not disrupted. Coordination of all regulators and the Government in terms of policy stance and liquidity management as well as timely communication to the market is essential for this.

In the short term, there is need to provide liquidity to NBFCs so that they are able to keep the credit pipeline flowing. Opening a backstop facility for NBFCs and HFCs could be considered by RBI through the National Housing Bank or directly to larger deposit-taking systemically important NBFCs.

In addition, sufficient system liquidity can come from providing credit lines to banks through special liquidity windows. Such windows had been opened for short periods for mutual funds (MFs) and other financial institutions during the crisis times of 2008 and the ‘taper tantrum’ of 2013. These provide refinance to MFs faced with rapid redemptions from customers. With quality collaterals, such refinance can avoid distorting the yield curve and leading to mark-to market losses.

The prompt corrective action applied to 11 banks is another cause for the liquidity problems. These banks are constrained from lending, and the deposits received by them are not returned to the system as credit. Some relaxation in their lending capability could be considered. For example, they could be permitted to lend to the National Housing Board which could use these funds for onward credit to the troubled real estate sector. Other banks too may be provided with cheap refinance for specific on-lending to NBFCs, after due judgment on prevailing conditions.

In general, a high cap of 40% on mutual fund holdings of NBFC and HFC assets appears to unduly expose them to risk. It is advisable that MFs be asked to bring down their exposure to these non-bank companies to 25% over a designated period of time.

Further, NBFCs may be allowed to recover dues under the SARFRAESI Act for 1 lakh and above rather than the current 1 crore. In a scenario of tight liquidity, this would be an added means to ensure recovery of loans.

At the same time, the RBI should be prepared to draft quick policy measures such as bonds for non-resident Indians which would help add to the foreign exchange coffers and stabilize rupee fluctuations. This is a tested method and the RBI should be in readiness, in consultation with the Government, to undertake such a measure should the situation so demand.

The other issue compounding the current problem is the high bond yields. Intervention in the rupee market by the RBI needs to be conducted in a manner that will contain bond yields.

Over the medium term, the financial sector would benefit from easing of limits and conditionalities on FDI inflows. Currently, FDI in the private sector bank sector is permissible only up to 74%, with Government approval required after 49%, and 26% of the paid up capital to be held by residents. In asset reconstruction companies, foreign portfolio investments should be the same as the FPI limits on corporate bonds.

Non-performing assets are often due to certain projects financed by banks and NBFCs, and these should be provided with a one-time restructuring plan which would address the NPA issue. Certain conditionalities could be outlined for identifying eligible projects.

A key area of action would be lowering the Government ownership of public sector banks. Although this is to be brought down to 51%, most banks continue to have high Government holdings. Such a policy would be in line with the overall reform proposals for shoring up bank capital and improving their efficiency levels.

India’s financial sector has made great strides in line with its economic liberalization process. To truly sync with the requirements of a fast-growing economy, the financial sector will require quick measures. The Government has been consultative and responsive to suggestions from industry and financial sector players. The same amount of openness from the regulator would go a long way in resolving the current issues.


Note: This article was first published in the Business Standard on 6 November 2018.

The budget must aim at reforms and create new shock absorbers